DOOR to ASIA is a Designers in Residence programwhere designers from Asian countries gather in a communityfor a period of time to create “communication design” for the local companies. 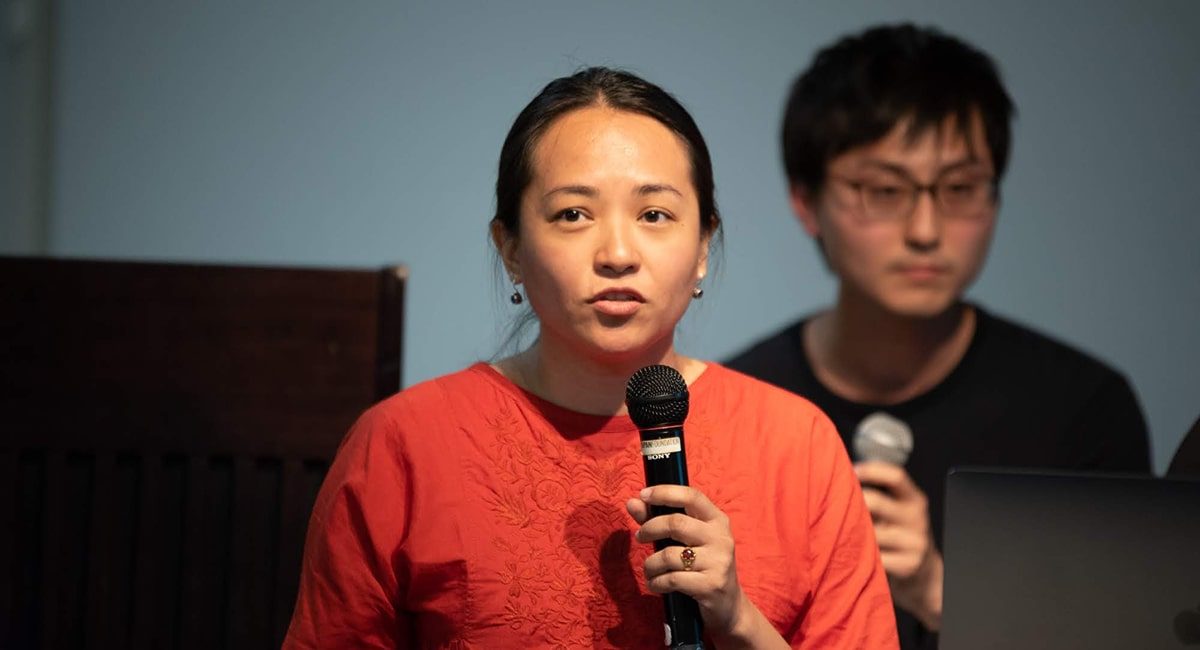 This year, I joined DOOR to ASIA to capture stories of our experiences in Tohoku, and eventually present an exhibition proposal about the program as part of my design residency output. 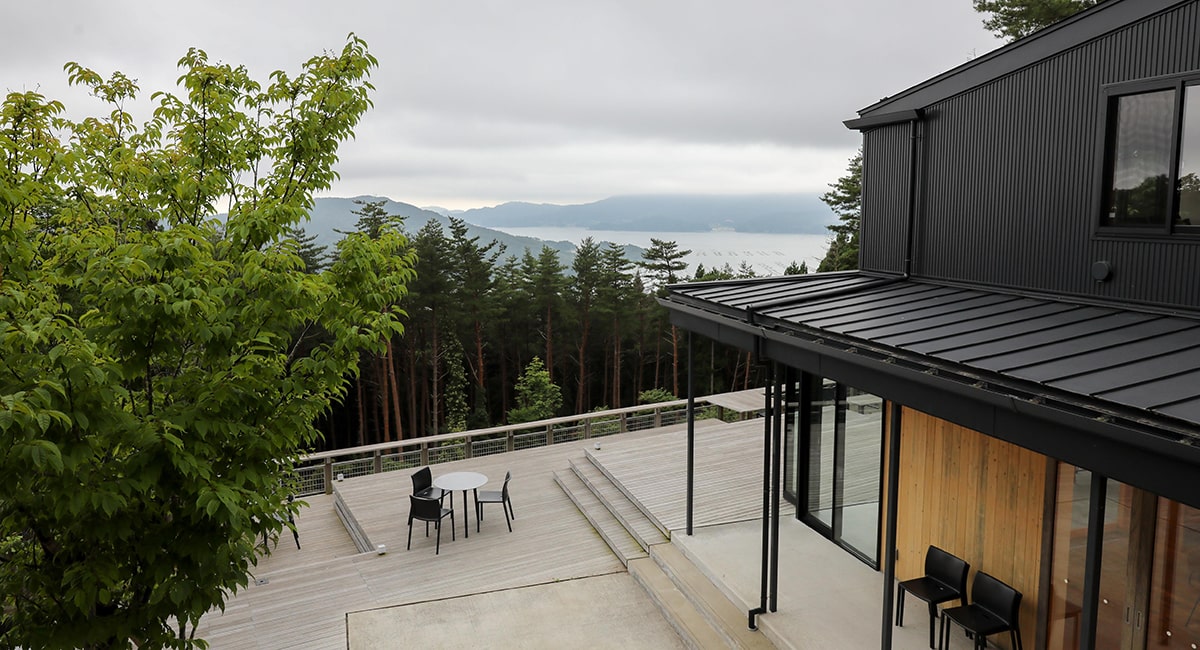 With our homebase in Rikuzentakata, Team DTA (me, Nelson Ng, and our coordinator, Jing Liao) ventured off daily for three days to visit companies located in the area and in the neighboring cities of Ofunato and Kesennuma. We had the opportunity of meeting this year’s batch of companies, as well as the companies that participated in the previous years.

From one of this year’s companies, Mr. Murakami, an employee of Suisen sake company, said at his introduction, “Our greatest fear was that if we couldn’t rebuild the company, that would just add to the long list of things lost by our customers.” They have since rebuilt the company and resumed operations after the factory was destroyed during the 2011 tsunami and earthquake. Designers Yuni (Korea) and Techit (Thailand) worked to reflect the company’s sense of connection to the community through a festival.

Designers Desiree (Taiwan) and Danis (Indonesia) shared how they encountered the skill of “knowing” with just a look into a person’s eyes from Mr. Onodera, and eventually relating this to his seafood processing business. Designers Samia (India) and Wengnam (Malaysia) visited places that mattered to Mr. Hasegawa, such as the river where he used to play as a child.

I also learned that not all designs were used by the local companies. Sometimes it took a couple of years, like the rapeseed and sunflower oil manufacturer who joined in 2016. It was only recently that he was able to start using the label designs for his bottles. One of the designers paired with him illustrated a story about his passion for work and family on postcards—currently lining the upper frame of his office window. For the owner of the milky oyster sauce product, DTA led him to the opportunity of learning more about Indonesia’s cuisine. 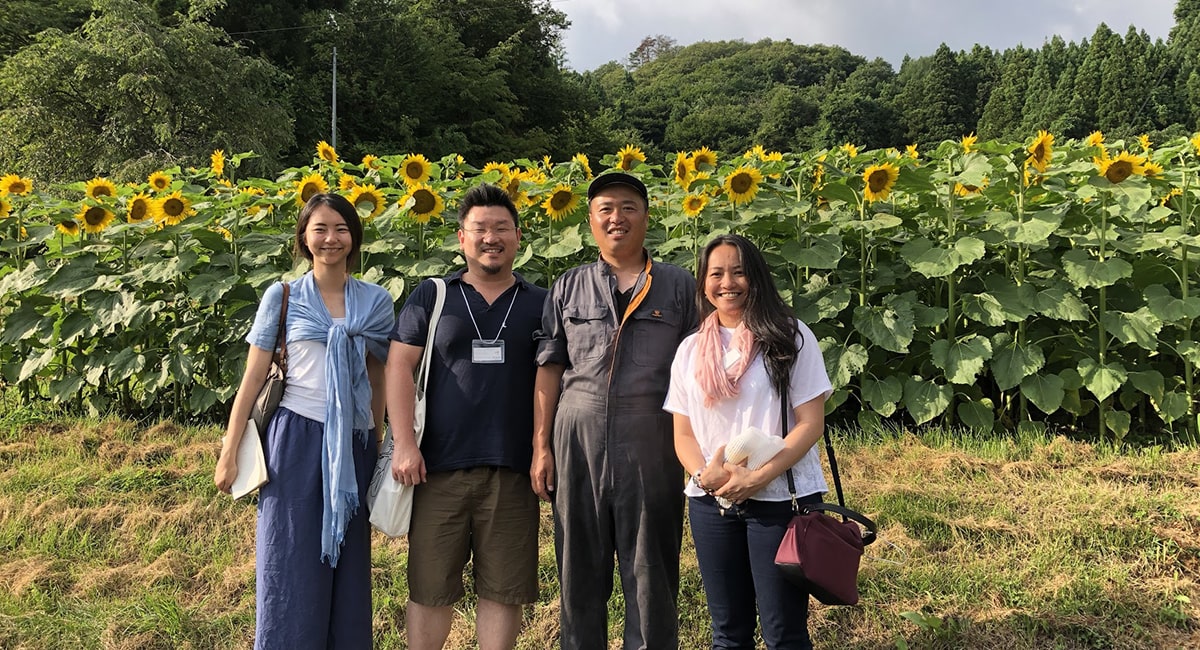 Each company in the program is different, with their own idea of growth and vision. But they were common in their passion for their products and their place in the community. Same as with the designers this year, I tried the best that I could to meet my company’s level of passion and help them imagine what the next step might look like.

Apart from the time spent with the companies, the program was even more meaningful because of our visits to the Rikuzentakata information center and the Rias Ark Museum in Kesennuma, the latter featuring a permanent exhibit on the documentation and remnants of what were left in the aftermath of the 2011 disaster. These helped me better understand how the disaster literally changed the landscape, altered the social fabric of these seaside towns, and how they are working to repair and heal these places. 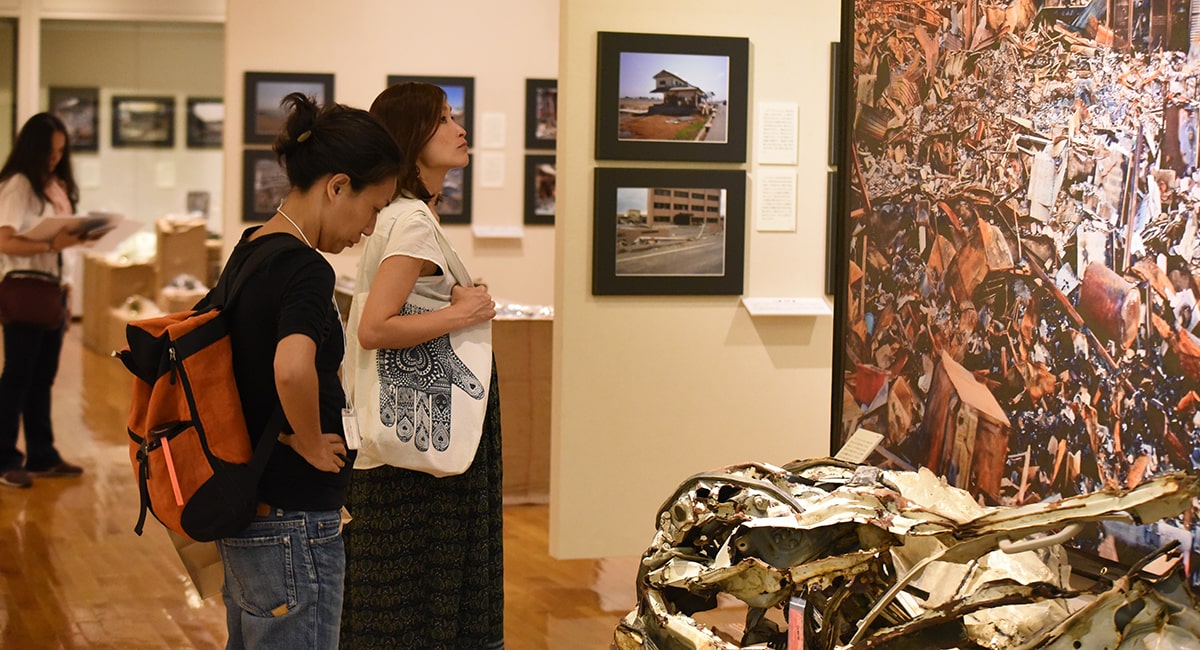 I welcomed energizing short breaks from too much thinking on my work, such as dropping by local shops for a quick snack, a morning meditation session, and having fun with the local children and their families through an art workshop followed by a barbeque gathering. 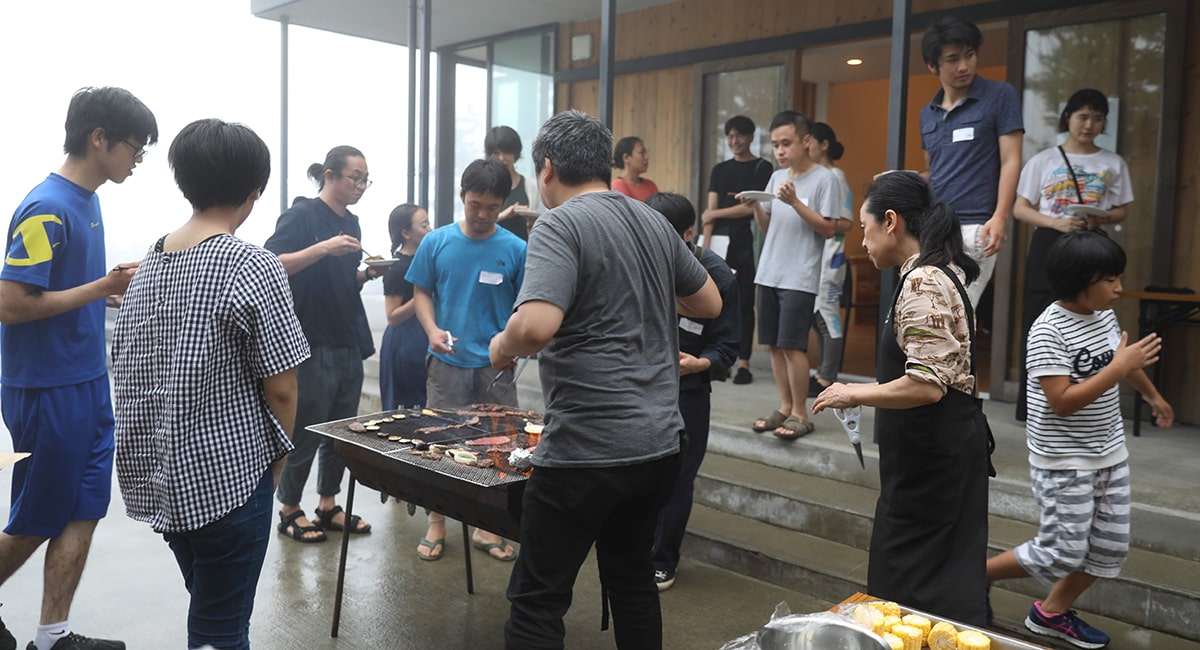 I wonder how Yuichi, Miki, and Kato-san imagined this program would evolve since it began with the first batch of designers and companies in the winter of December 2015. Prior to our trip to Tohoku, at the briefing session in Tokyo, they shared that developing friendship and trust was important for this program. I may have missed it then (even written on my notes!), but looking back, it was truly their friendship and mutual trust with the people of Tohoku that allowed me to move effortlessly and gain access to all these stories. I am thankful for this privilege extended to us.

The best moments in the program, for me, were the conversations with so many fascinating people—from the designers to the coordinators and staff—over a really good meal. It was in these moments that people were most relaxed, candid. After this experience, what will the next four years look like for all of us? 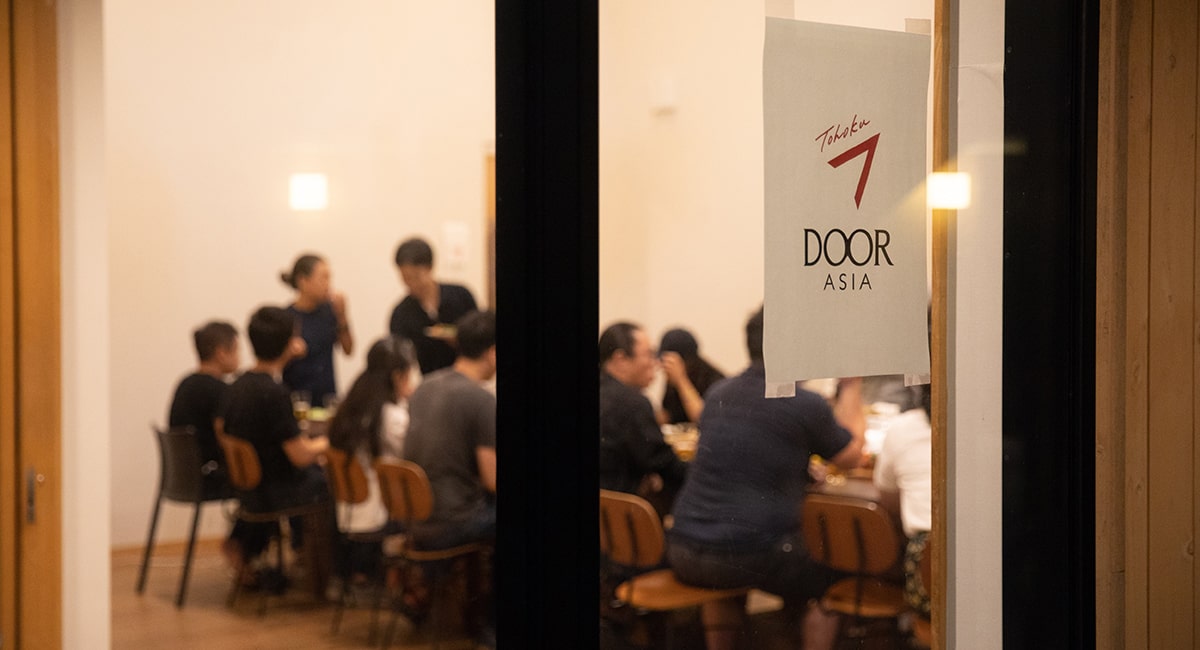 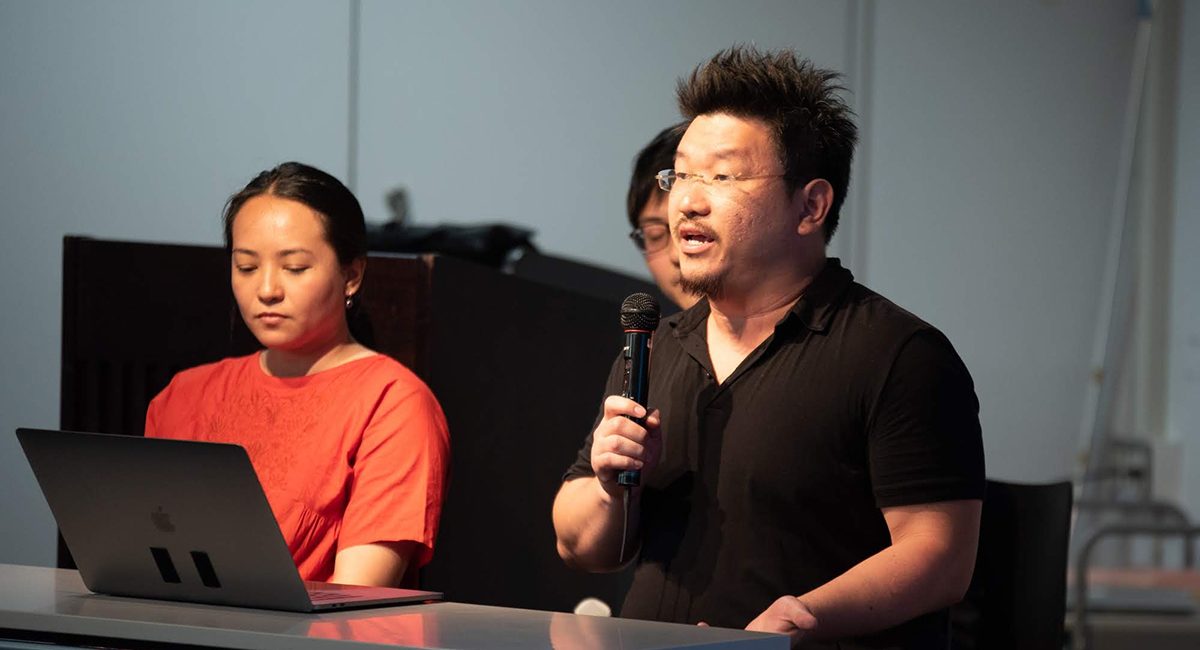 I came to Tohoku expecting the program to be about design, and about us helping the local people, but I ended up being moved to tears everyday, and realised that the program was nothing about design. 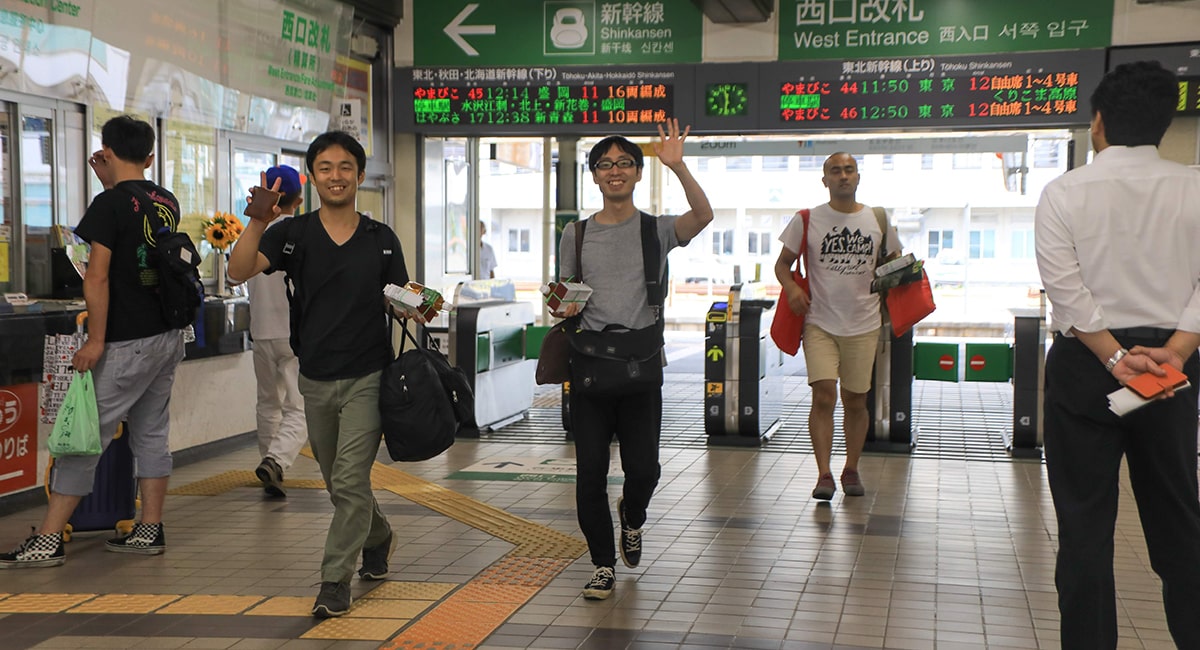 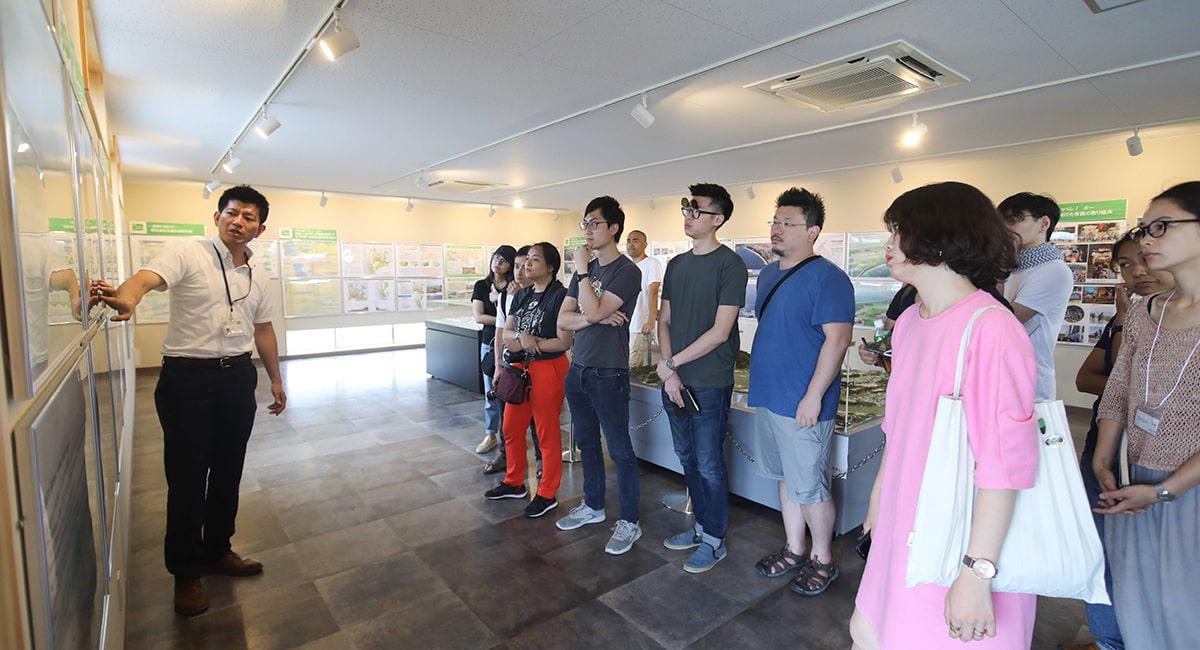 As our team was tasked to tell the story of Door to Asia, we had to first understand the problems that the program was trying to solve. In the first few days, we learned about the disaster and what happened in the region, but we soon start to realise the problems plaguing the area existed even before the disaster. To get a better overview of the situation, we visited many local companies over the next few days—some who were from past years’ Door to Asia programs, and some from this year’s. We would try to understand each and every company’s situation, and how the program has helped or affected them. Along the way, we would sometimes talk to coordinators or participants from past years’ programs to get different points of view of the story. We would visit around 4-5 companies a day, so after 3 days we felt like we had visited around 12-15 companies! With each visit, the story became clearer and clearer, and at the same time, we were also moved by each local business owner’s passion. Every single local business owner had something precious they were fighting for, and that was what made them special. After 3 days of visiting, we began our interviews with the Door to Asia staff, namely Kato-san, Yuichi-san and Miki-san. We first interviewed them together, and then separately to hear different sides of the story. We had long intense talks with them where we threw every single question we could think of. While they didn’t give any direct answers, and sometimes gave different answers to the same question, they gave us a very good history of Door to Asia, what happened before the program started and how they even all met. But even though the Door to Asia staff all had different answers, their intentions were similar, which was to help the people of Tohoku. 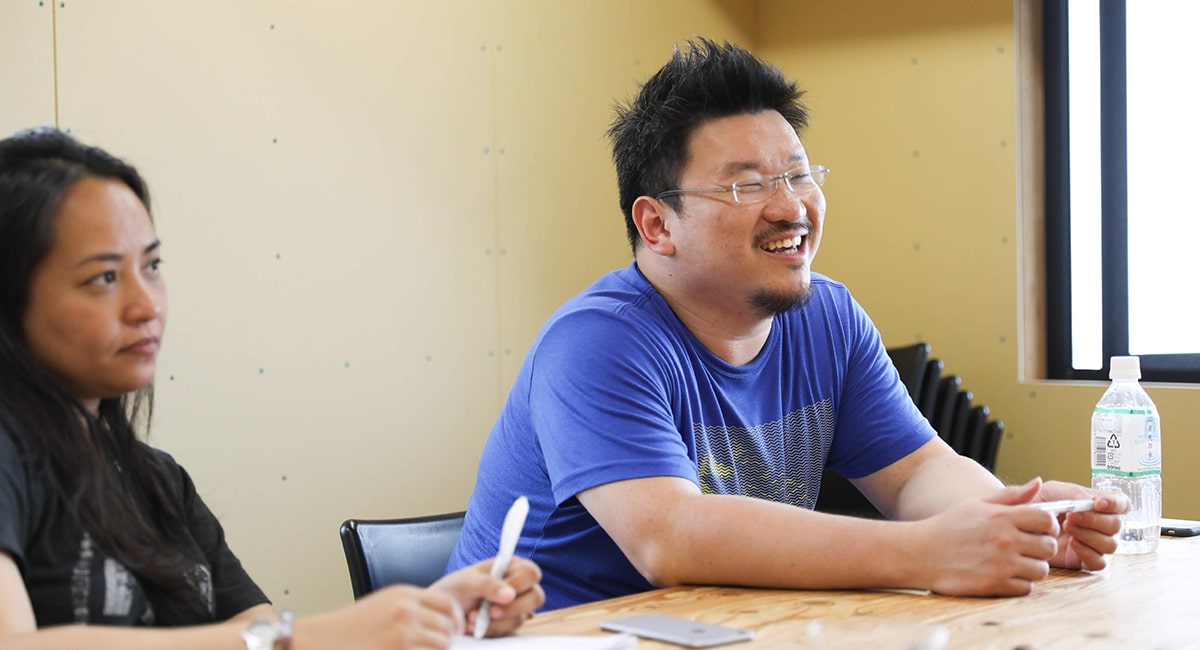 After long discussions with the Door to Asia staff, we realize the problem was exactly what we had experienced: there was no one way to define the Door to Asia program. Everyone had their own definition of the program, but none of them were wrong. It was hard to explain the program in a simple sentence. But this problem results in the program not being understood, which leads to the next problem of not being reported by the media, even after 4 years. It is hard to understand what really goes on unless a person comes to the program in Tohoku, and so much happens there. It is a great pity if the lessons learned in the program are not shared or made known to people outside the program. While I didn’t think much about it at first, throughout the week as we’re going to different places, or even during breaks at the smoking area, or when we share the same bus or car, we would chat with the other designers to hear their stories and what they thought of the program with each passing day. Every designer came from different backgrounds, but I could tell every designer really loved design and believed in the power of design. The program provided them with an opportunity to help people with design, which is something very rare in the commercial design world. Listening to how they felt about this program was very interesting, as some of the designers felt they were getting very up close and personal with the local company owners, something they were not used to back home. It showed them a different way to do design, and also showed them that there were business owners who didn’t only care about making profits. It showed them that real passion exists, and the designers become inspired by this through the process. By the end of the program, I wanted to find a simple way to express all of this. The Tohoku people, the local company owners, the Door to Asia staff, the designers; everyone had a part to play in the whole program. The relationships that were forged from past years’ programs were a key inspiration for my final concept: a two-way relationship. Everything in the program could be explained simply with this concept: whether it was between the local business owners and the designers, man and nature, city and its people, the past and the future, or even Tohoku and the outside world, everyone here is trying in their own way to forge two-way relationships between two things in order to build a foundation for a sustainable future. As the designers are trying to help the local company owners through design, the designers are also inspired and changed by the local company owners’ passion. The people who give end up receiving more in the end, and this perpetuates the cycle of goodwill. This was the key to opening the Door to Asia, and only through the cycle of goodwill can long-lasting and strong relationships be built. And only with strong relationships can miracles happen. This is what Door to Asia is actually about. Being an independent publisher, my final proposal was to create a two-way book to express this idea: a book that can be read both ways and told two different stories depending on which way you read it. One story was about the power of design, and the other story was about the passion of the local company owners in Tohoku. This framework allowed the story of Door to Asia to be told from multiple points of view, but at the same time expressed the relationships between them. With a book that explained the program, it would help people to better learn the lessons from Door to Asia without bringing every single person to Tohoku. It would bring Tohoku and Door to Asia to them. While it isn’t my first time in Japan, it is my first time getting involved so deeply with the Japanese people, and I’m sure everyone in the program has been changed and inspired by the process. I am grateful for the kindness shown to us by every single person in Tohoku, even by people who only met us for a very short while. The stories that I’ve heard and the people I had met in Tohoku will remain in my heart for life and continue to inspire me in the work that I do. I am very thankful to be able to be a part of the program, and even more so to be able to contribute to it by making the book. I look forward to getting more involved with Door to Asia, and hope to see it grow even more over the next few years!